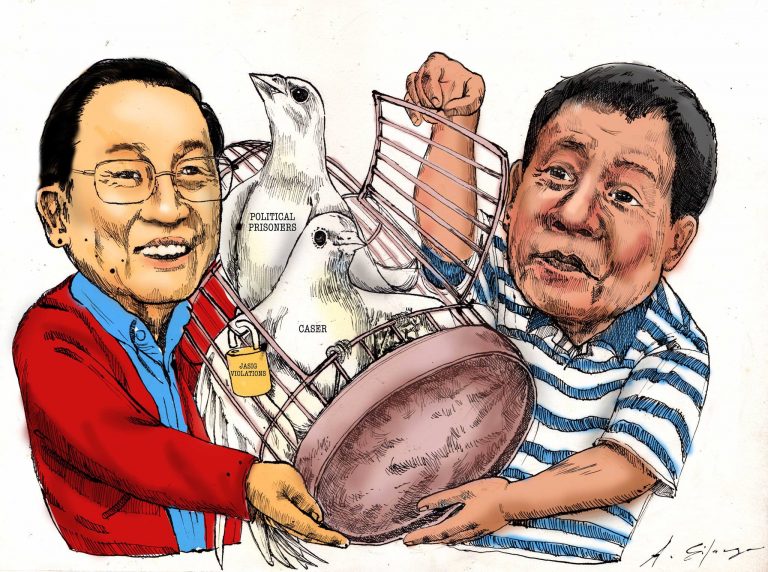 Research group IBON welcomed the resumption of talks between the National Democratic Front (NDFP) and the Government of the Republic of the Philippines (GRP), now on its fourth round.Finalizing a key agreement on social and economic reforms to address poverty is a big step towards peace, said the group.

IBON stressed that poverty, which underlies the armed conflict, has been worsened by the neoliberal economic framework that has kept the Philippine economy backward and enriched only a few. This must be urgently corrected through real reforms based on social justice.

The NDFP and the Duterte government negotiating panels had successfully concluded the third round of negotiations in January 2017, with an exchange of drafts for a comprehensive agreement on social and economic reforms (CASER).

During the fourth round of talks from April 2-6, the panels will attempt to reach significant agreements on CASER, which both sides agree is vital to address the underdevelopment that creates the conditions for armed conflict. Both parties have agreed that discussions will cover agrarian reform and rural development, national industrialization and foreign economic and trade relations, among others.

IBON said that the government’s 10+0 Economic Agenda and Philippine Development Plan (PDP) 2017-2022 repeat the neoliberal errors of past administrations and economic plans. Such policies have worsened the plight of the Filipino people causing widespread landlessness, unprecedented jobs crisis, chronic poverty and inequality that feed social unrest and conflict.

The group noted, for instance, that seven out of 10 poor Filipinos are in the rural areas where landlessness is prevalent due to land monopoly. The group said that 80% of agricultural lands are controlled by just one third of all landowners. Landlessness and rural poverty can be resolved through free land distribution accompanied by reliable and comprehensive support services. IBON pointed out that the experience of developed countries like Japan, South Korea and Taiwan proves that free land distribution to tillers is viable.

IBON added that the jobs crisis and poor quality of work is another urgent matter that can be addressed through real social and economic reforms. Minimum wage is less than half of the cost of living across the country, while around six of 10 workers are in low-paying, insecure jobs. IBON also said that aside from higher and decent wages, reforms that will truly develop domestic key industries would help create long-term quality jobs and reverse the jobs crisis.

The country’s economic development depends on building Filipino industry and changing the terms of foreign trade and investment relations, thus discussions on these are particularly significant, said IBON. The markedly growing protectionism in the US, Europe and other advanced capitalist powers underscores the flaw in over-reliance on global markets. The group asserted that it has become even more urgent to develop the national economy in a sovereign and independent manner that is not dictated by foreign capital, governments, and international agencies.

IBON said that these are much-needed social and economic reforms to build the foundations of a just and lasting peace. The peace talks and the CASER in particular is a chance for the government to begin reorienting economic policy to uphold real national development and the welfare of the majority of the Filipino people. Making substantial progress on negotiating an agreement on these reforms would help create momentum for and sustain other agreements being negotiated by both sides, including the proposed bilateral ceasefire. ###