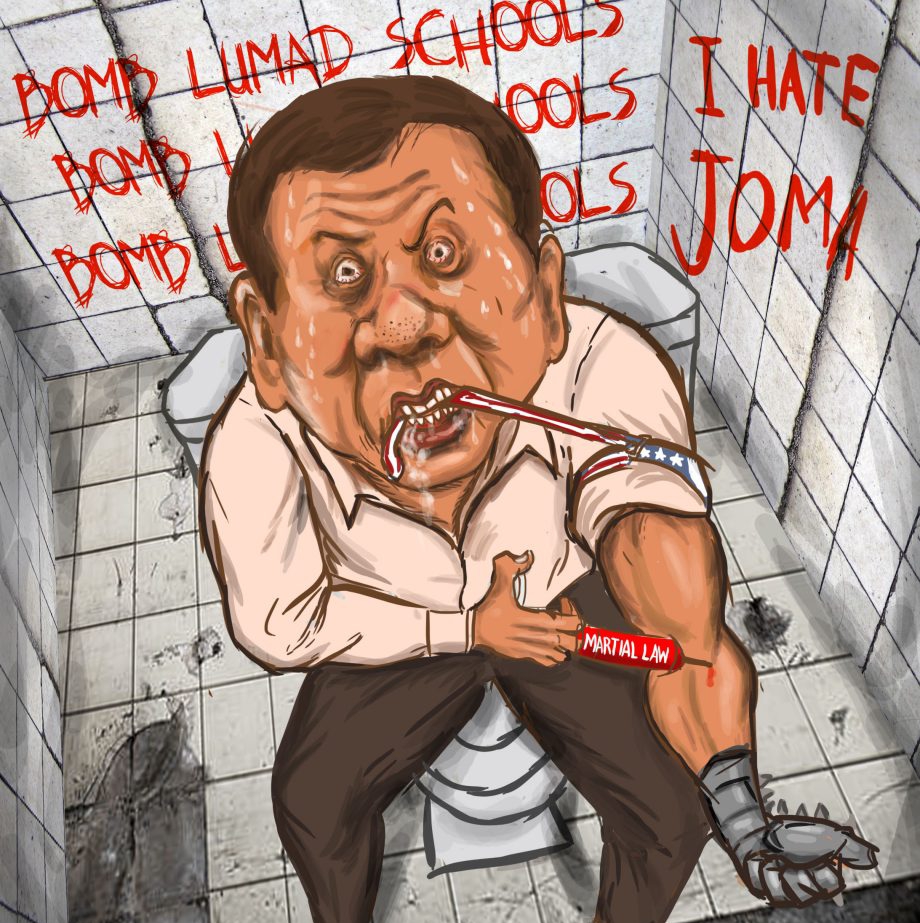 When Rodrigo Duterte was still the mayor of Davao City, he expressed support for the hardships of the Lumad peoples of Mindanao. One remembers a picture of him going viral on the Internet, holding a piece of paper with the words “Stop Lumad Killings” written on it. When he won as president, he expressed his intention to stop paramilitary groups from operating in Mindanao and harassing the Lumads, going so far as to order the military to dismantle the paramilitary groups. He even promised a peace process that would include the Lumad and other indigenous peoples and national minorities in the agenda.

But in the first year of the Duterte administration, more than 20 indigenous rights activists have been killed by suspected State security forces and paramilitary agents. Many of those killed were Lumad, the same group of people that Duterte promised to protect. Militarization has in fact intensified in Mindanao, and the residents of Brgy Han-ayan in Lianga town, Surigao del Sur have been forcibly displaced again by militarization just a few months after they returned to their ancestral lands. Hundreds more Lumad from Capalong, Davao del Norte are still in an evacuation center in Davao City, where they have been staying for the last two years due to the forced closure of a Lumad school and threats made to their lives by paramilitary groups supported by the Philippine military.

And to top it all off, Duterte, in a press conference immediately after his second State of the Nation Address, vowed to bomb Lumad schools being operated by non-government organizations (NGOs), including the Alternative Learning Center for Agricultural and Livelihood Development (ALCADEV), whose director was killed by paramilitary forces along with two Lumad leaders in 2015. He later clarified that he was only pertaining to schools and would not hurt Lumad children.

Duterte’s pronouncement is encouraging government security forces to continue and even intensify military operations in Lumad communities. This will definitely result in more violations of indigenous peoples’ rights, something that the Philippine government has already failed to respect in previous times. The Lumad, already mired in poverty due to land grabbing and development aggression, will be denied not just their right to education should these bombings push through, it will also most likely deny them their right to life, and we will be counting bodies of the Lumad by the hundreds.

The Assert Socio-Economic Initiatives Network of The Philippines (AscentPH) strongly condemns Duterte’s recent statements regarding bombing Lumad schools. Should these bombings and intensified militarization against Lumad schools push through, Duterte will be declaring war against the Lumad people openly, something that even previous administrations did not have the gall to do. AscentPH views such possible actions as tantamount to genocide against the Lumad peoples of Mindanao, and calls on all peace-loving countrymen and women to oppose such moves by this administration. We must not let a president gone mad destroy what the Lumad peoples and well-meaning NGOs have built.

It seems that the right to development of the Lumad peoples have no place under the Duterte presidency. Only a madman as a president would order the destruction of the future of the Lumad.