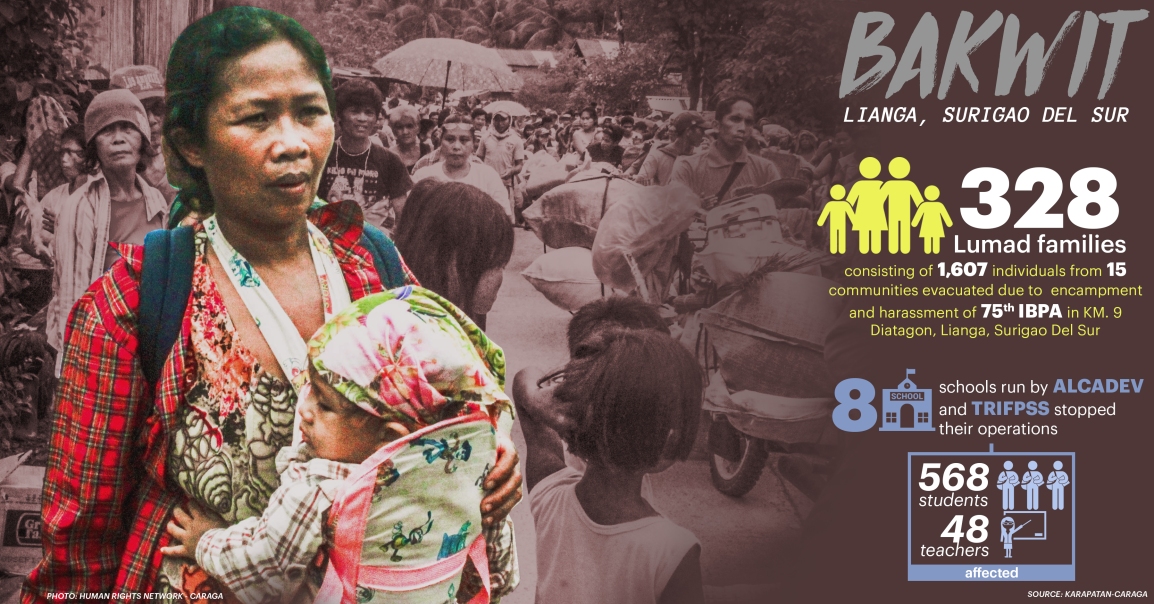 About 1,607 individuals from 15 communities of Barangay Diatagon, Lianga, Surigao del Sur and 3 communities from Barangay Buhisan, San Agustin town left their residences on July 16, 2018 due to more than a month of encampment of the 75th Infantry Battalion Philippine Army (IBPA) elements in their areas. Most of them belong to the Malahutayong Pakigbisog Alang Sumusunod (MAPASU), an organization of Lumad and are partners of the Tribal Filipino Program of Surigao del Sur (TRIFPSS) and Alternative Learning Center for Agricultural and Livelihood Development (ALCADEV). They evacuated to Brgy. Diatagon Gymnasium in Lianga after a 9 kilometer walk lasting 7 hours for fear that they will be subjected to more human rights violations (HRVs) with a military detachment right in their own community.

From then on, the sufferings and difficulties of the more than 1,500 community members persisted due to the military’s actions including food and media blockade, threats and harassment to teachers and staff of TRIFPSS and ALCADEV, forcible entry into the evacuation center and playing of movies in the evenings to disrupt the evacuees. Up to what extent will the military violate the human rights of the Lumad? It remains unimaginable considering that extrajudicial killings reportedly done by state security forces among their ranks have occurred since 2005.

ASCENT deplores the failed development strategy that government employs among the Lumad who live on land that is rich with mineral resources. The use of military might to drive them away from their ancestral domain reportedly to give way to mining companies such as Benguet Corporation, Abacus Coal, Great Wall Mining, ASK Mining and Coal Black Mining will only result to wanton destruction of their lives and environment. President Rodrigo Duterte himself said that he will select the investors and open the area for mining operations. This is in contrast to what the Lumad have already achieved in their alternative development programs implemented by MAPASU, TRIFPPS and ALCADEV.

By championing self reliance and food security, sustainable agriculture projects are undertaken in communities of the Manobo, Higaonon, Banwaon, Talaandig and Mamanwa in Surigao del Norte and Sur and Agusan del Norte and Sur. The young are taught alternative and diversified farming systems not only for their families but for their communities. They build on their collective pride and identity as indigenous people. Their knowledge and learnings are never only for their individual growth but for the development of their communities and country. Participatory leadership systems are in place in their political and social units.

The Lumad have a long history of defending their ancestral domain against intrusion of big mining companies which are backed up by military forces. They are united and strong in their fight for their right to their ancestral domain and self-determination. They will never disrespect the memory of the martyrs from their ranks who sacrificed their lives for Lumad rights and freedom.